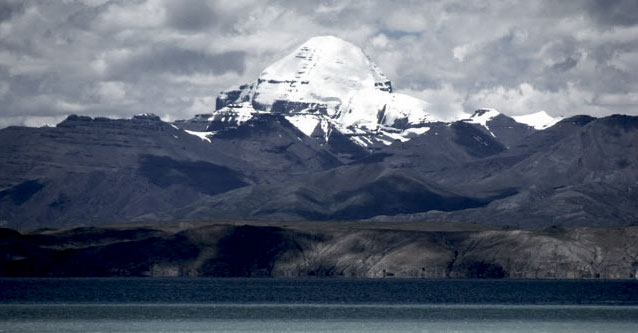 MT. KAILASH
Mt. Kailash alias 'Jewels of snow' as the Tibetians call it, is the most sacred mountain in Asia. The mountain believed to be an abode of Lord Shiva by the Hindus is also venerated by Buddhist, Jains and the Bon, Tibet’s indigenous religion. For thousands of years the Kailash region is the sources of the Ganges, the Sutlej, the Indus and the Brahamaputra River, which also drains the vast of Tibetan plateau. Hindus, declare it to be Lord Shiva's throne and according to the legends river ganges is said to have emanated from one of strands of Shiva’s long matted hair. Buddhist cosmography identifies Kailash with the mighty Mt. Sumeru, the central peak of the world. Jains identify the Kailash area with the place of their first saint's spiritual liberation. As a Bon centre, Mt. Kailash is the soul of universe and assures perpetuity and protection for all the Tibetan people.

MANSAROVAR LAKE
Situated between Mt. Kailash and Mt. Gurla Mandata is the sacred lake Manasoravor. This is another important pilgrimage sites to the Tibetans. It is known as Mapham Tso (Lake), "the unconquerable lake". As per the Hindu mythology it was formed in the mind of Lord Brahma (the creator). It was created to show the omnipotence of Brahma's mind, 'MANAS'. Holy Lake Manasorvar, the mother principle, represents Buddhist transcendent consciousness.

Devotees and high lamas are found devoted chanting and praying ceaselessly as most make the difficult spiritual walk around Mt. Kailash and Lake Manasoravor (clockwise by Hindus and Buddhist and anti-clockwise by Bon religion). This hardest walk around Mt. Kailash is called Kora or Parikrama that normally takes three days and is believed to release from the sins of 100 births. A legend has it that even a beast that bears the name of Manasarovar shall go to the paradise of Brahma. This is a journey of lifetime - a pilgrimage for us all.